Like many programming languages, ABAP supports exceptions. However, using class-based exceptions in ABAP has various pitfalls which should be avoided.

When defining a class-based exceptions in ABAP, you have to pick a root exception class from which to inherit. ABAP has three different root exception classes: CX_STATIC_CHECK, CX_DYNAMIC_CHECK and CX_NO_CHECK. Choosing the right base class is of utmost importance.

CX_STATIC_CHECK is a checked exception which means that the compiler checks whether the exception was handled correctly. Whenever a checked exception could occur, it either needs to be passed to the caller of the method by placing it in the method’s signature or it needs to be caught in a catch block. If it is neither caught nor declared in the signature, the ABAP compiler will raise a warning. If you ignore this warning and the exception is thrown at runtime, your program will crash and you’ll receive a ST22 short dump.

CX_STATIC_CHECK should only be used if both of these conditions are true:

When defining your exceptions, it is often a good idea to use fine-grained exceptions. That means that you should be able to tell the root cause from the name of the exception. An exception called CX_MY_API_ILLEGAL_GUID is much more expressive than an exception called CX_MY_API_ERROR. Using a generic exception for multiple different error cases is not a good idea. While it reduces the number of exceptions you have to define, it makes it rather difficult for a caller to react to different errors in different ways. To tell each error apart, you would have to introduce some kind of internal codes which get carried by the exception. While this is doable, it is harder to handle in the code. Also, it is very difficult to define meaningful error texts for a generic exception. Generic phrases like “an error has occurred” are not very helpful. The flipside of using many fine-grained exceptions is that a caller might have to catch multiple exceptions. As you are able to catch more than one exception in a catch block in ABAP this may be a tad inconvenient but usually is not too much of a hassle. If you want your callers to be able to handle all your exceptions in a generic way, consider creating a generic exception superclass from which all your exceptions are inheriting. That way you get the best of both worlds.

Whenever you create an exception in ABAP, you should make sure that it carries a meaningful and translatable text. After all, each caller should get their exceptions in their preferred language, otherwise they might not be able to tell what is going on. By default, the texts you attach to an exception are not translatable. To rectify this, your exception has to implement the IF_T100_MESSAGE interface. This interface enables you to attach a message defined in a message class as the exception text. You can also define some attributes which can be used in the message. While it is possible to define more than one such text on an exception, it is usually not necessary if you opted to use fine-grained exceptions. The process of making exceptions translatable is rather buggy in the old-school SE80 transaction. From my experience, you are better off defining the exception in the ABAP development tools (also called ABAP in Eclipse). There, you can define an exception in a fully text-based way, with less “magic” involved. The following code snippet shows how to define such an exception in the ABAP development tools: 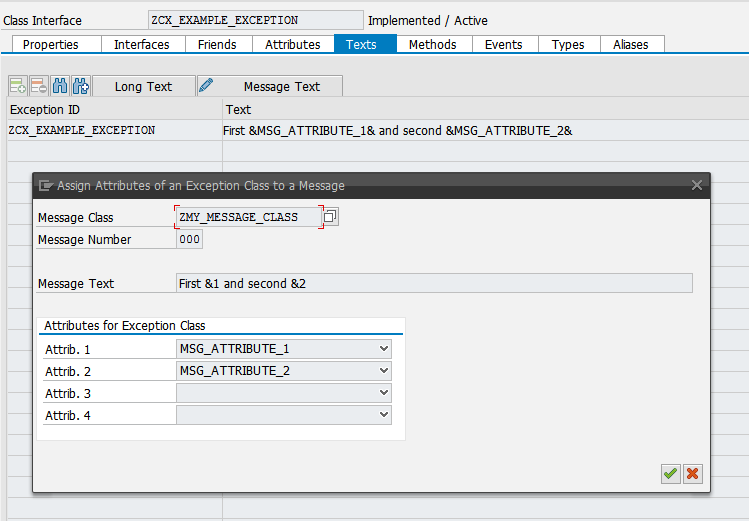 I have a seen a lot of improper exception handling during my time as an ABAP developer. The most notorious one is the empty catch block. This means that whenever an exception occurs, the code just continues running. While this can be fine if the try block only contains a single method call which is expected to fail in certain situations, it also can be very dangerous if it occurs in a big try block as the application then enters an undefined state. An exception implies that only parts of the code were executed successfully. When the application is forced to keep running afterwards, its behavior might be off. Maybe it’s going to crash later, due to a CX_SY_REF_IS_INITIAL exception, maybe it completes successfully, but wrote incomplete or corrupted data in the process. Ignoring an exception like that can be very dangerous and should be avoided. Often, empty catch blocks are provoked by an improper exception definition. Using a checked exception, when an unchecked would be correct, forces the caller to handle the exception in some way which increases the temptation of just adding an empty catch block. Also, if the exception doesn’t communicate what exactly went wrong or when it will occur, the caller will be hard-pressed to handle it in a meaningful way and may just default to an empty catch block again.

A variant of the empty catch block is the insufficient catch block. In it some kind of message is raised which documents the error, but the application continues to run. In addition to potentially putting the system into an undefined state, this pattern also makes it very easy to hide the root cause of an error. If we want the program to continue to run and not lose critical information, we need to preserve as much information from the raised exception as possible. That means that our message should at least contain the text of the raised exception as well as any available information on previously raised exceptions. This information is available via various properties and methods on the exception object. Sadly, I’m not aware of any convenient way of converting a caught exception into a message which is as expressive as a short dump. That means we will have to manually parse the exception properties to build a good error message.

Due to the problems outlined in the last two paragraphs, it is often a good idea to just let the program crash. ABAP short dumps are a great help for diagnosing problems and a crashed program at least doesn’t corrupt any database data. If you’re unsure how to handle an exception, my recommendation is to not handle it at all.

As we’ve seen, there a quite a few pitfalls when defining exceptions in ABAP. To sum up, you should: